Discover Keys, Scales and Chords with your Fretmeister

Chords in the key of Fretmeister 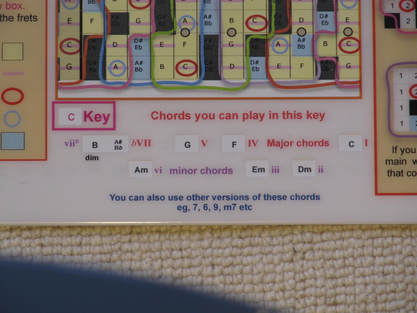 Once you've selected your Key, the small windows, with Roman numerals, show the 7 notes of the scale, reading from right to left. These are also the chords you can play, or use to write songs, in that key.
​There are seven chords in each key, three major, three minor and one diminished. Each is built on one of the seven notes of the scale (see more below). However, in practice there are actually eight chords that might sound right while playing in a particular key because often the bVII (flat VII) sounds better than the technically correct VIIº (diminished VII). Both are shown on your Fretmeister. There is more information about this in Writing Songs

How chords work in music.

A musical scale has 7 notes. The simplest scale is C (because it has no sharps = # or flats = b) so the C scale has the notes C D E F G A B. The chords you can use when playing in the key of C are all the chords built on the 7 notes in the scale. What does that mean?
Basic chords are triads of notes (3 notes) that follow patterns depending on which kind of chords they are.

Chromatic scale of semitones
Scales also follow set patterns depending on whether they are major or minor.
A major scale always has intervals of semitones in the following pattern - 2, 2, 1, 2, 2, 2 - so if you start from C you get C D E F G A B which leaves a semitone to return to the root note. If you start from another note and follow the same pattern of intervals you will get another major scale: D# F G G# A#C D is the scale of D# major
Natural (or relative) minor scales follow the pattern 2, 1, 2, 2, 1, 2,  leaving a full tone to return to the root note. There are also harmonic minor and melodic minor scales which follow slightly different patterns.